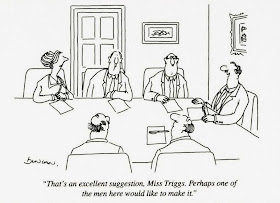 I've lost track of the number of times I've experienced the following scenarios:

1) During a heated discussion―speaking clearly and out loud―I say something that no one appears to hear. A man repeats it minutes, maybe seconds later, to accolades and group discussion.

2) I am participating in a group interview of a candidate. When he answers questions he looks directly at the men in the room, but never or rarely looks at me―even when I was the one to ask the question.  He asks questions of the men only―even questions which I am clearly the most appropriate person to address.

3) I am at a party. The topic of physics (or cosmology, or data science) comes up.  A male I have just met proceeds to explain to me a New York Times article he has read on the subject. I mention that I have my PhD and I'm an expert on the topic. Instead of using this as an opportunity to ask me questions and learn from me, he continues talk about what he knows. Bonus points: He turns to my boyfriend―who isn't a physicist or a data scientist―and asks him questions about the topic.

4) I am part of a male-dominated discussion.  I keep trying to participate but repeatedly get interrupted and talked-over.  The only way to be heard is to interrupt back, talk-over people myself, or call out the behavior and ask people to let me finish.  All of these feel overly aggressive and makes me uncomfortable, so I end up remaining silent, not contributing to the discussion.

Of course there are plenty of men who do not behave this way, many conversations that don't go this way―but there are many that do. I suspect that introverts also experience some of the above challenges regardless of their gender or race. When you add race to the equation the incidence of this marginalization is even higher. Interrupting, ignoring, over-talking, and dismissing also happen as the result of difference in class and social status, but research shows that gender is a dominant factor in this dynamic.

And it's not just men who marginalize.

After reading about gender-bias and conversation dominance in the classroom, I asked for a peer to observe a physics class I was teaching and keep track of the discussion time I was giving to various students along with their race and gender.  In this exercise, I knew I was being observed and I was trying to be extra careful to equally represent all students―but I STILL gave a disproportionate amount of discussion time to the white male students in my classroom (controlling for the overall distribution of genders and races in the class).  I was shocked. It felt like I was giving a disproportionate amount of time to my white female and non-white students.

Even when I was explicitly trying, I still failed to have the discussion participants fairly represent the population of the students in my classroom.

This is a well-studied phenomena and it's called listener bias. We are socialized to think women talk more than they actually do. Listener bias results in most people thinking that women are 'hogging the floor' even when men are dominating.

And, studies show again and again that men are usually dominating.  As Soraya Chemaly discusses in this article:

As adults, women's speech is granted less authority and credibility. We aren't thought of as able critics or as funny. Men speak more, more often, and longer than women in mixed groups (classrooms, boardrooms, legislative bodies, expert media commentary and religious institutions.) Indeed, in male-dominated problem solving groups including boards, committees and legislatures, men speak 75% more than women, with negative effects on decisions reached. That's why, as researchers summed up, "Having a seat at the table is not the same as having a voice."

While the above comic and video make light of this phenomenon, the consequences are serious and detrimental to both the individual and to society as a whole.

This article describes six woman scientists who were not properly acknowledged or rewarded for their contributions.  Research shows unjust courtroom dynamics where gendered expression results in women's testimonies being interrupted, discounted and portrayed as not credible due to deviation from masculine speech norms. This article describes how doctors are more likely to interrupt female patients and allow them less time to speak than their male patients. This research shows how race, outspokenness, and gender effect school suspension rates.

As Chemaly discusses in this article:

Masculinized expression is generally considered something women should emulate in order to be successful.  This is one of the uncomfortable dimensions of leaning in and closing the confidence gap. We train girls to speak and act one way and then we scratch our heads and castigate them for failing as adults. “Women have to learn to negotiate like men!” When women do engage in characteristically “male” ways [the] men [they are interacting with] are frequently condescending and patronizing.

The implications of gendered speech norms and the discounting of “feminine” speech norms like politeness in the public sphere is glaringly obvious online, where a woman’s simply expressing opinions with confidence means strange men, often with mob support, issue rape and death threats and express other forms of gender-based hostility.  Feminine user names get an average of 100 sexually explicit or harassing messages a day compared to the 3.7 that masculine ones do.

So what do we do?
This list is modified from this article, also by Chemaly.  The below advice is for everyone, regardless of your gender.

1) Examine your implicit biases; Stop interrupting women and girls. Parents and teachers (both males and females) interrupt girls twice as often as boys. This teaches girls that their words and thoughts are not as important or valued.  If you don't believe you are doing this in your classroom―be scientific about it―have someone come in and observe you or tape your classroom.

The most powerful illustration of the effects of gender on perceptions of importance, competence and speech are the experiences of people who undergo sex changes. Scientist Ben Barres wrote publicly about his female-to-male transition experience. After transitioning, he gave a well-received scientific speech and overheard a member of the audience explain that "his work is much better than his sister's," referring to when he was Barbara Barres. Notably, he concluded that one of the major benefits of being male was that he could now "even complete a whole sentence without being interrupted by a man."

2) Stop telling girls to be "little ladies" and "good girls" who help with chores, wait their turns, do not display pride, express anger or be demanding.  Politeness and taking turns, two highly-ranked lessons we teach girls in particular, are not virtues in the public sphere. Conversely, nip American male "boys will be boys" entitlements in the bud by holding boys and girls to the same standards of self-regulation as children.

3) Stop promoting the idea that masculinized expression is superior and that women have to emulate it to be successful. The expectation that women be gender bi-lingual, or code switch, is a function of being part of a muted group. The kind of confidence that many people advocate just means a woman has to work very hard to overcome sexist gender incongruities in order to succeed.

Telling women to operate more like men in the public sphere: change their speech, change their hair, change their clothes and change their style of expression will only amplify androcentric norms. If we want to close the confidence gap, of course it helps to talk to women about self-doubt, but really closing this gap, as with all the others―pay, safety, rights―requires structural changes in every institution within which we live.

I would add to help those of us already indoctrinated into these gendered speech dynamics:
4) Create spaces for those who have trouble being heard or breaking into conversations.
Structure meetings so that everyone is given a chance to speak, and limit durations so that everyone gets a fair representation in the meeting.

If you notice a member of your team is not participating or not being heard, discuss the issue with them privately and try to come up with a solution that feels comfortable to this person.

7) Create classroom and workplace environments which are conscious of these gender dynamics and put in place methods which help you overcome the unconscious biases (we all have) towards allowing white men to disproportionately dominate the discussion.

Additional Reading
The majority of this post is a summary of the ideas presented in these three articles by Soraya Chemaly:

There are also links in the text to many books and research studies on this topic.